I'm still here, listening and praying for those who've sent requests. I'm just not posting much at all.

Just now, I ran across a blog that has a LOT of helpful information–Estrangements.

Shut out from your grandchildren? (We have that in our family.) This website addresses that pain: Grandparents Denied Access 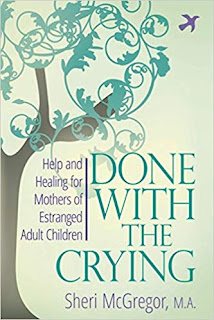 I haven't read this book, but it looks good....

...and I'll pray for you and your family (click on Prayer List). My goal with this blog is to be a positive place of inspiration. A refuge where you as hurting parents can find understanding.

"But there’s a story behind everything. How a picture got on a wall. How a scar got on your face. Sometimes the stories are simple, and sometimes they are hard and heartbreaking. But behind all your stories is always your mother’s story, because hers is where yours begin."
- Mitch Albom, One More Day (submitted by Gayle, a hurting mom)

...is best lived when it's lived for others for God's glory.

In 2002, I ended my first marriage and moved into another home with my daughter. My son stayed with his father. Deeply hurt by the divorce, he didn't speak to me for two and a half years. Desperate to reconnect, I tried everything to reach out to him. My son refused my efforts. In December 2004, our relationship began to heal. By the time he graduated from high school in May 2005, we were mother and son again. In 2009, three hurting moms read a post I'd left on WritersWeekly.com in 2003 when I was so needing to talk to someone who understood my pain. Their letters inspired me to write–with my son's permission–our story for Guideposts magazine. The article, "Mom Interrupted," was published in November 2010. Several months later, one of those three mothers–after she asked if she could share our Guideposts story with other hurting parents–inspired me to start this ministry.